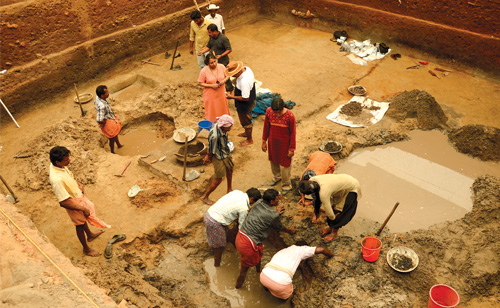 The KCHR conducted archaeological explorations and excavations at the site of Pattanam for nine seasons from 2007-2015. The Pattanam archaeological site is located in Chittatukara Panchayat, Vadekkekara village, between Kodungallur and North Paravur in the Periyar Delta, Ernakulam District. The site is about 4 km, east from the Arabian Sea coast. The present course of River Periyar is 5 km, North and Paravur Thodu, a tributary of the Periyar, flows about 1 km south of the site. The excavations by the KCHR have unearthed a large volume, and variety, of regional and non-regional artefacts from different parts of the subcontinent, Indo-Mediterranean region and South East Asia. The site can be dated from circa 500 BCE and has yielded evidence for the Iron Age- early historic, the medieval and the modern periods. The early historic period (circa 3rd century BCE to 5th century CE) seems to be the most active phase of the site. Currently, archaeologists in the KCHR o are working on post excavation studies of the Pattanam artefacts.

1. A Comprehensive Study of Indian Rouletted Ware and Other Associated Fine Wares from 2007 Pattanam Archaeological Excavation
Sarathchandra Babu has undertaken a study of Indian Rouletted Ware (IRW) and associated fine ware at Pattanam with an aim to build a ceramic catalogue for Pattanam with drawings and interpretation of the types and forms from the site. The present study focuses on the 2007 season of excavations. Cataloguing is an important step towards referencing, interpretation and comparison of ceramics. In addition to cataloguing, fabric types and intra site distribution are aspects that the study looks at.

2. Study of Semi-Precious Stone Blanks from Pattanam
Dineesh Krishnan and Rachel A Varghese have initiated a study of semi-precious stone blanks from the 2007-2015 excavations by the KCHR. The study will involve detailed documentation of the blanks followed by an analytical enquiry into their function, location within the production sequence and the exchange networks of the period and comparative analysis. The first phase of documentation has commenced recently.