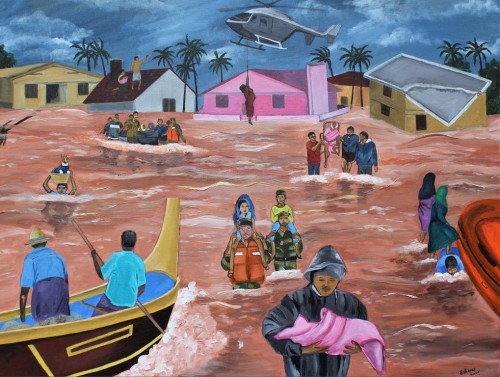 Not confining to the discipline of history, social memory is an area of research where we find the confluence of different disciplinary practices and the negotiations of different intellectual traditions and specializations. In the proposed research on ‘ Floods, Archives and Memories’ the Kerala Council for Historical Research envisages to carry out substantial research on the 2018 August Floods in Keralam through the analysis of the memory of the people who had experienced it.

Many regions in Keralam are frequently inundated during the annual monsoon. But this year’s flood was entirely different. Many believe that the August 2018 Flood was the severest natural disaster that the region has faced in living memory: surpassing perhaps the Okhi Cyclone, Tsunami of 2004 and even the ‘Great Flood of 1924’ (as it is often called). Exact comparisons may not be possible. According to the Indian Meteorological Department; Kerala received excess rainfall which was 37.5 per cent more than the usual. The worst hit district such as Idukki received 87.5 per cent excess rain than the normal. (‘The Times of India: August 17, 2018’) Notably, the excess rainfall occurred during an extremely short period of time. The unexpectedness of the recent floods were backed by the fact that between 1st August and 19th August there was almost unbroken rainfall which measured 758.6mm; nearly three times higher than the 287.6 mm which was predicted. (Study Report Kerala Floods of August 2018: September: 2018)

We may say that the present flood was partly a man-made disaster as it occurred in the backdrop of extensive stone quarrying, destruction of natural water storage systems, illegal construction of resorts and so on. It goes without saying that unbridled human greed has played its role in the making of this disaster.

Recovering after a catastrophic flood is a long and painful process. For the people who have lost all their possessions in the flood, the life after the flood is never the same again. As they try to put their devastated lives back together, we aim to pay attention to the issues such as mental trauma, loss of physical memories (photo albums, family documents, and certificates). Documenting flood experience is an important way of keeping the flood high on the agenda for the future society. The testimonies from survivors and witnesses can be used to understand their changing perceptions of environment and society. By archiving and sharing the experience of the flood survivors and rescuers, we aim to build a repository of flood memories which can be used in flood prone areas in Keralam or elsewhere with suitable modifications.

By bringing together environmental history and oral history, we intend to develop ‘sustainable flood memories’ in which communities share their experiences of local flood events. By studying the flood memories of people in the inundated regions of Keralam, this project aims to provide a long term perspective on memories and how they shape people’s perceptions of environment and society.

By aiming to rethink about the past flood events through lesser known images and photographs, we intend to provide a greater dimension to the existing historical records. This resource base includes governmental reports, photographs from private collections, magazines, newspapers, paintings and so on. The purpose of this archival exhibition is to provide sustainable flood memories to the society. In the context of floods, images and visual representations play a vital role in understanding how these events were perceived and experienced by individuals and communities.

With the same spirit, this project proposes to build ‘conversational narratives’ around flood memories.

The project intend to interact with three broad categories of people who have directly experienced the Flood of August 2018; the Survivors, the Rescuers and the Relief workers.

Each group can be further sub-categorised as the following.

The people who are to be interviewed are also active participants in this project. We expect the participation of students and prospective researchers in helping with a variety of tasks including interviewing, archiving, and transcribing oral history material.

You can upload photos/audios/video/literary works  related to floods  in our digital archive : KCHR Digital Archive